How Captain Stan lives and works on the road

A professional on wheels: how one man travels and works on the road

For Captain Stan Collett, permanent life on the road is a dream. He is semi-retired, but his ongoing work as a Master Mariner, surveyor and engineer (to name a few) tends to keep him pretty busy. Stan lives in his motorhome, travelling from job to job, and loves it.

“I’m one of the very few people who can work from home and travel the country while I’m doing it,” says Stan, who adopted this way of life about 6 years ago.

Having spent his whole life on boats, Stan’s transition to motorhome life was pretty smooth. In fact, unlike for most of us, converting to life on wheels was taking a step back from life at sea. “At night I didn’t have to worry about the weather turning and the wind picking up or anything like that!” Stan says.

This lifestyle didn’t all just fall into place like this for Stan. He started planning for his mobile retirement dream about 17 years ago. He had his sights set on the nomad life. He started a marine refit business, Portrush Holdings Ltd, and set about creating a role for himself where he would eventually be able to take it on the road.

After deciding to semi-retire, he moved into the truck he had been using for his marine repair work. He says before that, it was doubling as a work truck, office and for weekend getaways. He began adding ‘bits and bobs’ to it as he went, working out what he wanted and needed on the road.

For his sixtieth birthday, Stan decided to treat himself to an upgrade.

Having figured out exactly what he needed to make motorhome travel perfect, he commissioned a nine metre long campervan from TrailLight. The new-and-improved edition features 6 solar panels on its roof. 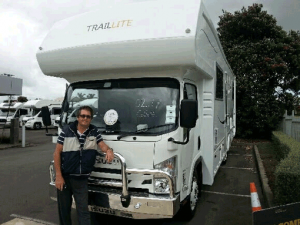 Contrary to the images that spring to mind when we think of semi-retirement on the road, it’s anything but a holiday. Much of Stan’s work is hands on, but the rest of it, he says, involves a ‘hell of a lot of writing’, emailing and communication. For this, he swears by his on-the-road internet connection.

“If I didn’t have the internet, I’d be lost,” says Stan, who says he wears ‘many hats’. His survey work for the government, amongst other things, involves constantly writing out reports and staying in touch.

Having run his boat refit company for years, he has ongoing work in China and across New Zealand, that without having access to the internet, simply wouldn’t be possible.

It’s not all work though, and Stan keeps himself entertained. “When I found out about this Netflix thing, I was hooked!” says Stan, whose favourite watch is Vikings, and is a self proclaimed ‘sci-fi nut’.

The simple charm of living on the road

For Stan, his favourite part of living the way he does is being able to travel the country, working in a different place every day and talking to new people, whilst still being connected.

Stan doesn’t miss a thing about living in one fixed spot. “I don’t have to mow lawns anymore and I don’t pay rates,” he says. He occasionally camps on a mate’s farm in Auckland’s Dairy Flat, where he can top up with water and other necessities.

He can’t narrow down his favourite place in New Zealand, saying that despite the way environmental impacts are changing it, the whole country is a pretty special place and he loves to explore it.

Wireless Nation can make your dream of working on the road a reality. Check out our Lifestyle Broadband or NZMCA member packages to keep you connected, no matter where you go.